Falling in Love with an Idea

I'm interested in how other people who do creative work describe how they get their ideas. Not where, but a description of how. How they visualize this process. In an interview, David Lynch describes ideas as "flowing for human beings all the time" everywhere, like fish [minutes 7-9]. You have to want to catch one, so you bait your hook with a desire and have patience. I think of that as being open and ready. And then, he says that when you catch one and "fall in love" with it, you should write it down, because you think you will remember it, but you won't, and then you will be distraught. Those weren't exactly his words, but that was the idea.

For me, ideas are more like things in the air, swirling around, and you can just reach up and grab one. Maybe they are like dust motes and are of no substance. Maybe like feathers or butterflies. Sometimes they are just fleeting, sparks of interest, but that's it, the gem, there is no going further with them. Other times they are more like a bur and won't let go, or a cat following you home (I wish).

I don't write down all my ideas, but sometimes I catch one out of the corner of my eye and want to revisit it, explore it, see where it goes, so that one gets written down. I may not be ready to "fall in love" with it, but I can feel the potential.

Perhaps the question of where one gets an idea is really about how to start about catching one. I've written about my process before in this 2019 post, "Explore. Research. Sketch." and about collecting in the 2017 post, "but in things. I also discussed "Where Do You Get Your Ideas" in 2012, which became the basis for the "Creative Arts Process Cards" in 2017, to help others discover their own ideas as well. The cards are still available at nevermindtheart.

Earlier in the same video interview, Lynch talks about finding beauty in a thing but "as soon as you name it, it stops being beautiful, to some people" [:44-:51]. On my walk up the hill on Tuesday, I see a downy white feather float from the sky. Then a downy black one. Another white white. And more, like cherry blossoms in a light breeze. It's a wondrous moment, before I know anything at all. But I look up. Feathers don't usually fall from the sky. On top of a telephone pole is a small raptor, a peregrine falcon (I think, although the bright morning light makes visually I.D. difficult). I am thankful I can't see beyond the action and results, but he or she is twisting and tearing away as the feathers fly. The bird is beautiful, the feathers are beautiful, but as soon as I name it breakfast, it has a sorrowful cast.

Even though raptors are quite violent, the normal life of animals of prey, there is a beautiful book, The Peregrine, which I mentioned in this post. I won't embed the video I took of the flying feathers, but if you are interested, you can find it at this link. 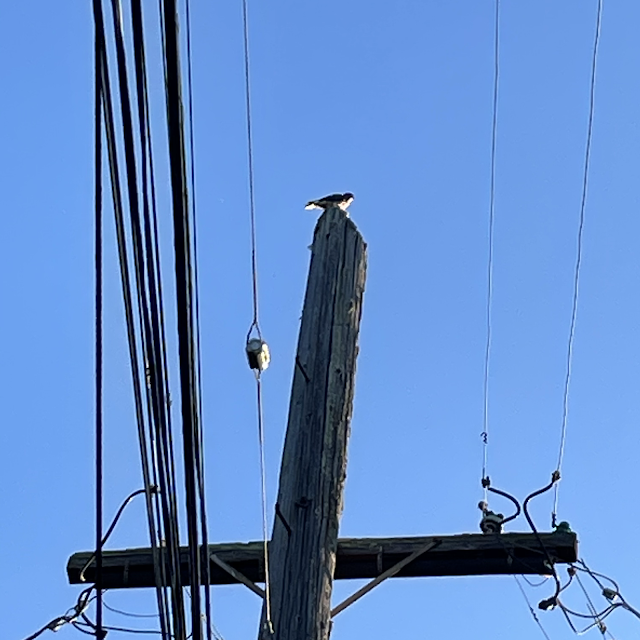 Liz A said…
your Creative Process Cards are on my wish list this holiday season ... but for now, I love reading your thoughts on creative process here (and thank you for the links back to earlier musings) ...

and your feathers, the terrible beauty of their source, recalled to me a turkey hunted by coyotes in our Hill Country back property several years ago ... the feathers and a bit of blood on stone were all that remained in the end ... an indelible memory that became a memento mori in stitch
December 4, 2020 at 7:03 AM

Alisa said…
Liz A—Thanks for that. it is interesting how an object or combination of things can tell a story or spark a project, isn't it? A (2011) musing about the subject: "Materials and Hidden Meaning" at https://makinghandmadebooks.blogspot.com/2011/04/materials-hidden-meaning.html
December 4, 2020 at 9:04 AM