Things I Learned in a Book about Trees: Wildwood

Since reading Robert Macfarlane's book Landmarks, which I wrote about here, I've been gathering books he's mentioned. The first was a short little book, The Living Mountain, by Nan Shepherd. In it you feel the thrill of visiting the same spots in different seasons, and of being so drawn to a place it becomes a longing. She writes that she didn't go to reach a particular height or partake of a sweeping view, she went for the journey, and to be present at one place in that moment.

Macfarlane also wrote about Roger Deakin, another wanderer drawn to places and filled with curiosity. I have two books by Deakin by my bed, Waterlog, which I haven't read yet, and Wildwood, which I have almost finished. (Throughout the pandemic I've mostly been escaping into C.J. Sansom's Shardlake historical mysteries, not my usual fare, and delving into the time of Henry the VIII.) I keep running my finger over the softcover book of Wildwood because the title, although a trade Penguin book, is letterpress printed very deeply (what printers call a "sock," rather than a "kiss").

Wildwood uses trees as the connecting theme of travels, and Deakin lovingly describes both living trees and objects made of the wood itself. His journeys took him to Australia (he was English), and to the place of the latest Sacha Baron Cohen film, Almaty in Kazakhstan, where he writes that Barrie Juniper discovered that our domestic apple is descended from a wild tree in the mountains near there (283). It was astonishing to learn that apples, unless grafted, will produce trees with fruit different from its parent and from its siblings. So, apples were one of the things I learned about from Deakin, which may then lead to reading Juniper's apple book. The reading keeps branching out (er, yes, pun intended).

The second curious thing was the origin of the term "leporello." I have heard book artists use this term to describe accordion-fold books, but I never liked it. More particularly, I did not like the sound of the word. Now I have a second reason not to want to use it. Apparently, in Don Giovanni, the servant, Leporello, is charged with carrying the book of conquests, which he unfurls at the proper moment. And it is an accordion-fold book. So using the term "leporello" has unpleasant, if not threatening or violent shadows.

ATIL. Another thing I learned was the origin of the phrase (or rock band), "Three-Dog Night," was that it referred to a very cold night in Australia, where one needed three dogs to keep warm . (There were apparently "two-dog nights" and "one-dog nights" as well.)

Deakin writes about other trips to visit with other people who studied or worked with trees, and he has a whole chapter on meeting the British artist David Nash, who makes sculptures both with fallen and living trees, land art and gallery art, both, depending on the scale. One is called, "Wooden Boulder," which was meant to be carried away by truck, but got lodged in a stream and continues moving through the landscape.

With the "About the Author" information is a quote from Deakin that encapsulates his feeling and philosophy: "A writer needs a strong passion to change things, not just to reflect or report them as they are. Mine is to promote a feeling for the importance of trees through a greater understanding of the, so that people don't just think of 'trees' as they mostly do now, but of each individual tree, and each kind of tree."

As I read the book I keep thinking of my late friend, the writer Judith Tannenbaum, who died almost a year ago to the day. When I last saw her, told her about my interest in birds, and asked what she was interested in she said, "Trees." She had recommended the book, The Overstory by Richard Powers, which I promptly purchased for a trip. I wonder if she ever read Wildwood. I think she would have liked it. 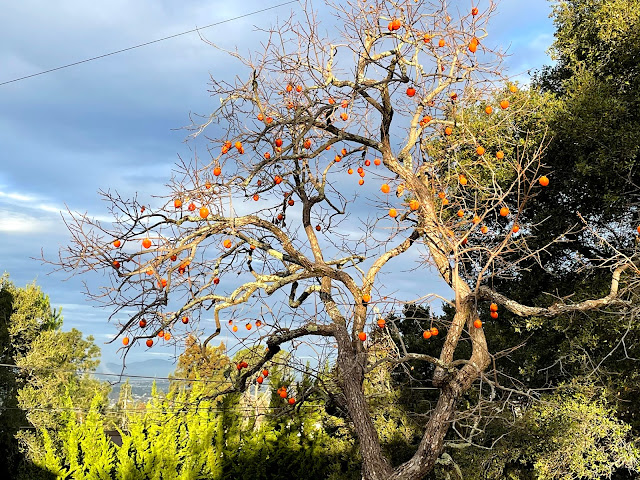 Persimmon tree up the hill in Berkeley, California.

Another Robert Macfarlane book, The Lost Words, sparked a beautiful song from the point of view of a tree, "Heartwood," presented on The Lost Words: Spell Songs album.