Imin Yeh was a graduate student when I was teaching at California College of the Arts, and although I never had her in my class I did go to her studio and see her MFA installation and was entranced. She had printed paper with tiny flowers and had wrapped common objects. This was 2009, I believe, and I can remember only an oscillating desk fan, each blade wrapped as perfectly as the housing. She had wrapped dozens of objects, if not one hundred. My take away from the wonder of the work was that she was both making each object the same as the next, and showing how their transformation elevates them to art. The concepts were intriguing. The craft was crisp.

Recently, I was going through some small artworks that I had bought from an art vending machine made from a refurbished sticker/tattoo machine, "50 Cent Prints!" that Imin had installed in a 2014 printmaking exhibit at CCA that I co-curated (blog posts here and here). I came across this print, "morale box." It cheered me. 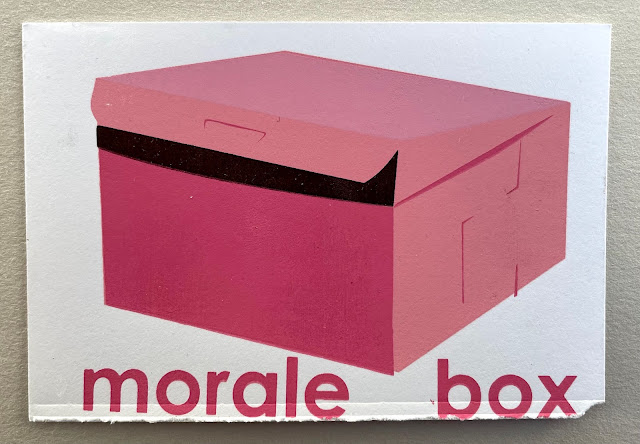 Something told me that the print was by Imin, but I wanted to check. I knew she had hand-loaded the vending machine and collected the prints from a wide group of printmakers, so she would know who had made it. 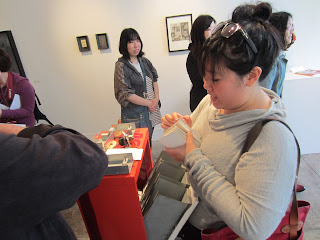 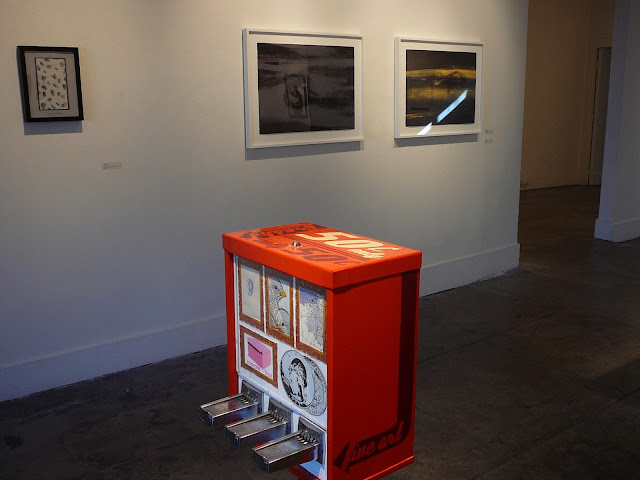 (Carole Jeung's monotypes in the background, above.) At the time, I bought several prints.

I checked Imin's website and contacted her. Not only did she make the print, but she told me she had recently made another print that could be cut and folded into a three-dimensional version of the pink pastry box.

And many, many other paper facsimiles of objects. A pink PEZ candy. iPhone chargers. A stinkbug. Gallery cheese. Lucky pennies. Expanding Briefcase. On the "collect" page, the small press run by Imin Yeh and Paul Mullins as e.l.hymns,  you will also find "Sad Career Erasers" and "Extra Sauce" packets, "100 Lucky Cabbages," blue artist's tape, and other oddments, all to be folded from paper they have printed.

I bought two mailboxes, "A Sculpture at the Corner since 1894": one for a friend. 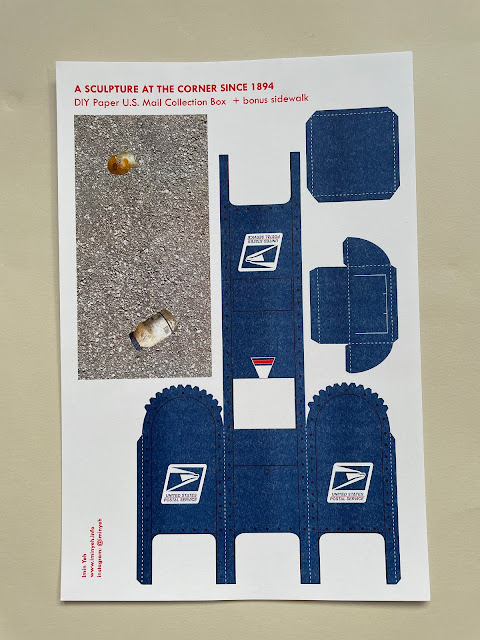 I built mine. Although there were no instructions other than cut and fold lines, it was pretty self-explanatory. A ruler helps, as does a bone folder for scoring the creases before folding, X-Acto knife and cutting mat. 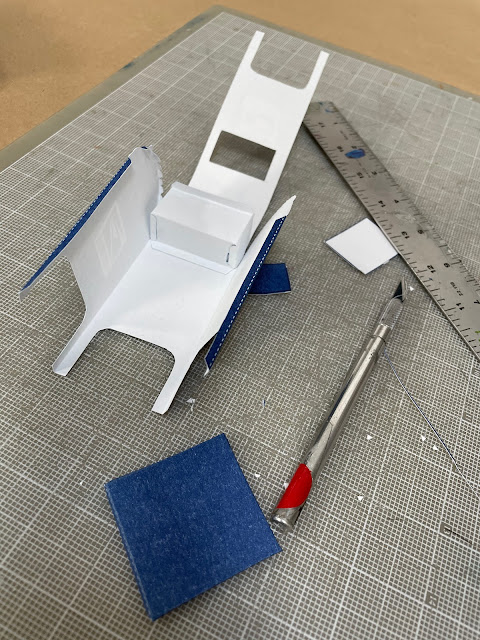 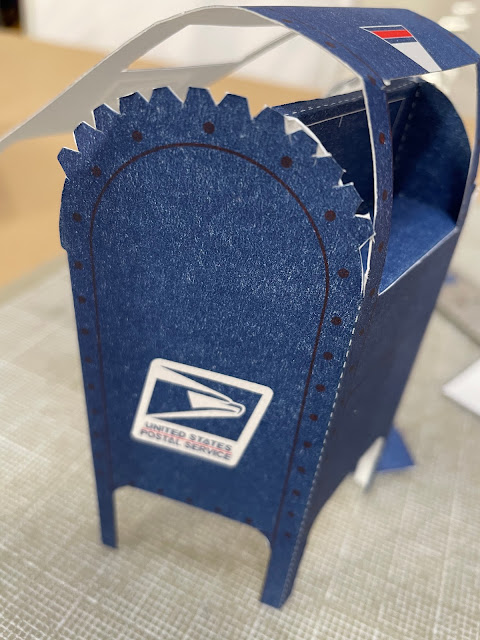 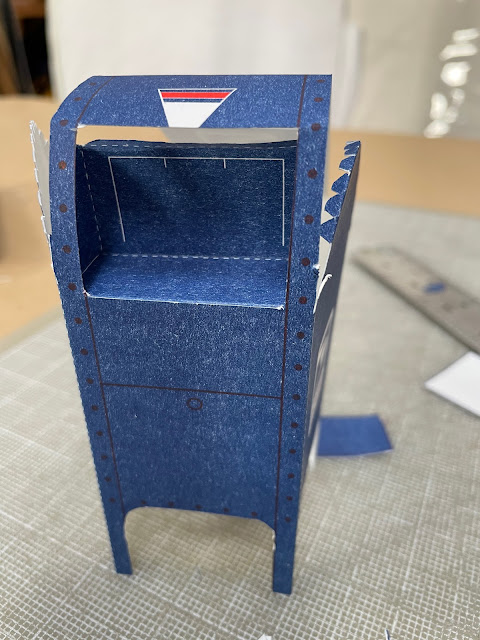 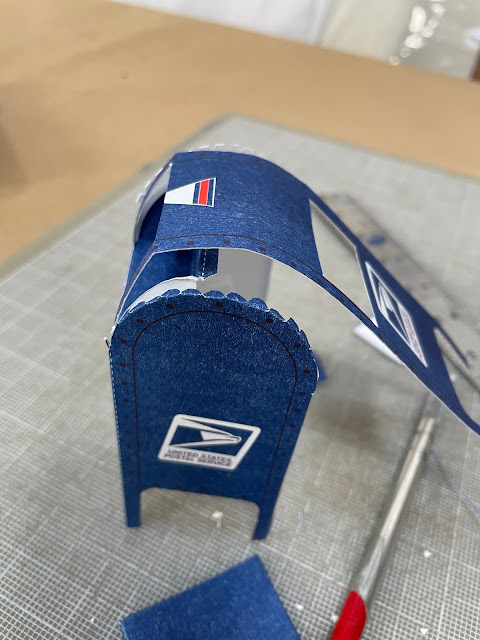 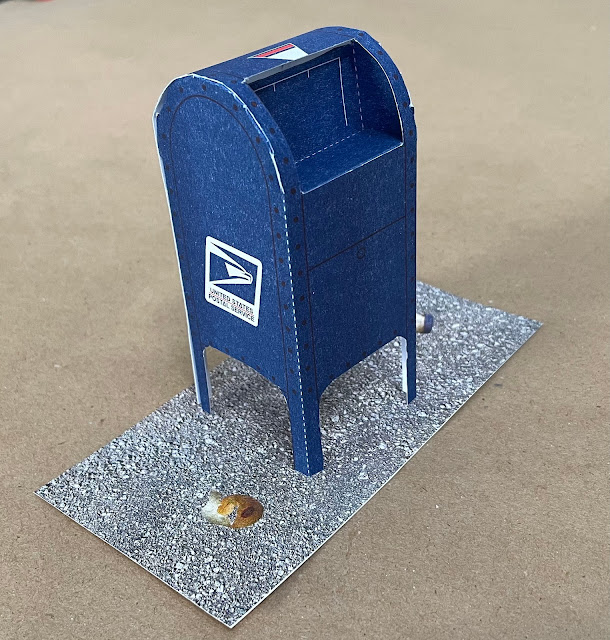 It is possible I cut out one square too many on the back, but I figure I could put little letters inside and be able to see them. Pretty cute.

Imin included the pastry box with my order. She and her partner had sent them out as holiday cards for 2020, reworked as "A Little Treat." 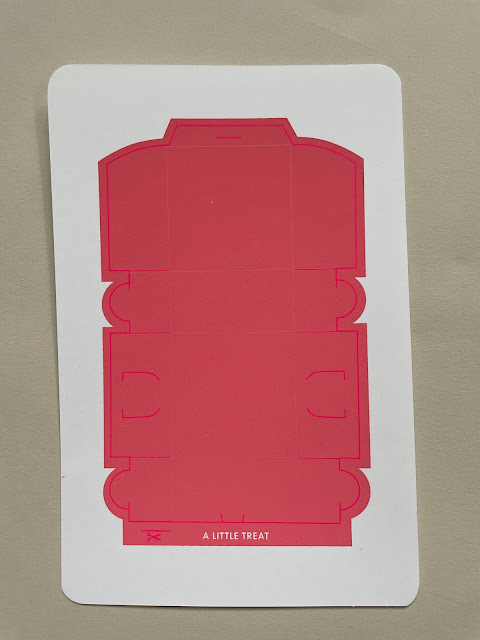 The words on the original print, for me, though, were what caught my attention. The partially open lid of the box, the potential reward, delight, or boost of energy it contains. But that is what is interesting about memory. Once you see, you can't unsee. So when I look at the pastry box, I can still see, in addition to "A Little Treat," the words: morale box. And I'm energized.

You can read more about Imin Yeh at her website.