I'd been thinking about my seam ripper in the wrong way. Rather than an enemy to be avoided and handled only after a failed sewing attempt, it could be a friend to slow me down and help me practice patience. I've worked with old clothes before and generally tend to be impatient, just cutting them apart. But in Susan Briscoe's recent recent book about boro-inspired projects and after writing a post about it, I decided to take her advice; although I went ahead and cut the jeans apart, I decided to at least unpick the pockets. As Briscoe notes, the fabric yields much more interesting results that way. 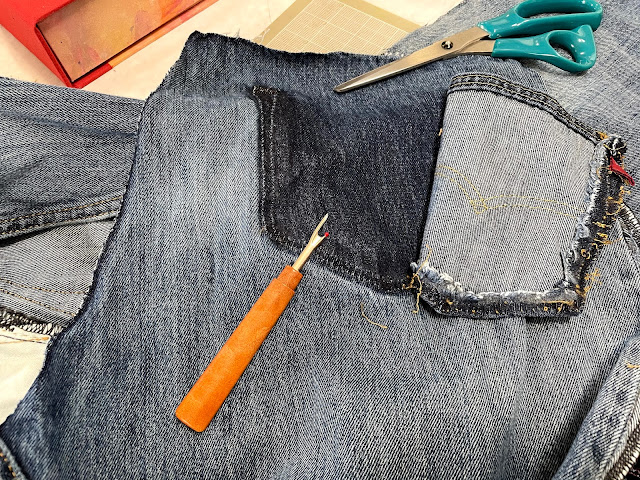 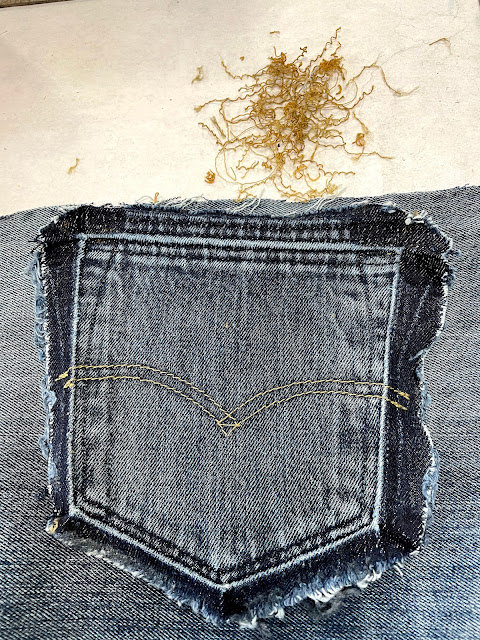 all thread removed, pocket and back panel ironed 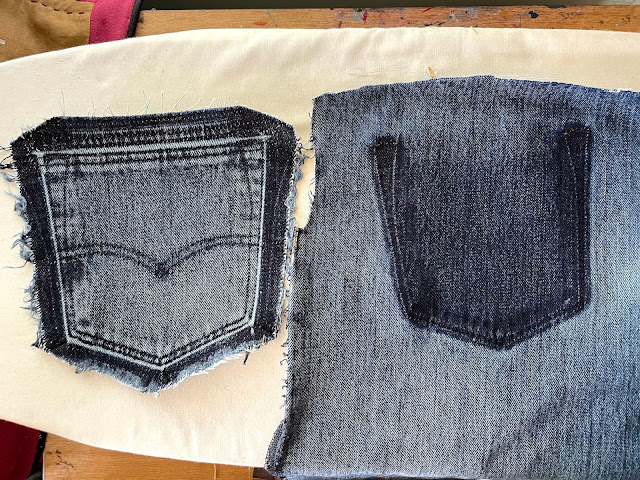 I also felt compelled to order the out-of-print boro catalogue from the exhibition in Japan that Briscoe mentioned.

When I read through the catalogue, Boro: Rags and Tatters from the Far North of Japan, I felt melancholy afterward, not what I generally feel when looking at an exhibition catalogue. Although the catalogue was trying to show how much care and beauty was taken to preserve scarce fabrics by patching and mending, I could feel the poverty and cold intensely. Briscoe had explained this in her book, but the catalogue showed it in page after page of similar garments, up close and personal: huge, heavy quilt-like kimono that the whole family slept inside; padded jackets; work pants; baby diapers; adult diapers and all the other items needed for daily work, sleep, and life.

In Tohoku, Aomori Prefecture, the people were so far north that cotton wouldn't grow there, so everything was initially made of coarser hemp, which they could grow, spin, and weave. Stuffed with hemp wadding against the cold, the clothes used every bit of the materials that were available. Over time the layers built up like torn and weathered flyers on a telephone pole. So many layers. The clothes were passed down not just one or two generations, but sometimes three or four. At a death the descendants might fight over the cloth left behind. Some women carefully tucked away stacks of cloth, saving what they could, a precious stash for future patching. Cloth was like currency.

In 1892, when the railroad was finally built that connected them to Tokyo and the southern parts of Japan, it brought them cotton. Not new cloth because they couldn't afford it, but bundles/bales of used and soiled clothes and cloth that the women all chipped in and bought together, then washed the cloth with lye and "rice-rinsing water," and scrubbed it with fish scales.

It's a small book, but powerful in the large images and bleeds, the handwritten style of the type, and the repetition of each item's use. The catalogue tried to portray the self-sufficiency and beauty of a self-sustaining practice and way of life, but I became aware of the practicality, the cold, the tiredness, and perhaps even the bitterness, in addition to the focus and care. It was not an easy life. The works/cloth/clothes in this collection were collected by one man, Chuzaburo Tanaka, who began as an archeologist and later became an ethnographer, collecting stories and customs and everyday objects. Ultimately he saved a piece of history.

So, with my twenty plus quilts I began thinking what it's like to have one or none. With my patching of my bed quilt (lazily) I might be able to say I minutely understand a tiny corner of the work. The stitches I saw in the catalogue, though, were not of decoration but of practicality: there is no elaborate sashiko pattern there, only a simple running stitch. While they deserve a place for us to see, boro works were created by necessity, under difficult conditions. It was a hard life, as it is in many places around the world today.

Briscoe, as I had mentioned in the earlier post, has her own collection of boro clothing. She cautions in her book that the projects she features are "boro-inspired," and we should be calling new articles by this name. They are not actual boro. It is worth noting the difference.

Paula said…
Thank you for your comments on boro. I had the same reaction at an exhibit once I saw. To me the garments represented a life too close to the bone. And once again it made me reflect on the position of incredible privilege I enjoy in my very ordinary life. The rags used were glorious.
February 18, 2021 at 2:26 PM

Alisa said…
Paula,
Thanks for writing. I agree it is not comfortable thinking about privilege, hardship, and beauty all at the same time: to hold conflicting feelings in the same hand. But it's possible.
-Alisa
February 18, 2021 at 3:14 PM