A Box from the Thread Jar

I was so taken with the idea of the improvisational needlepoint created by Steve Reinke (previous blog post here), that I decided to try an unplanned work of my own. What would my stitching look like? Where would it take me? I took embroidery and sashiko threads out of my thread jar and sorted them by color. Most were about two or three inches long, some were longer. And some were threads I had dyed myself.

I marked out a grid on the 18 needlepoint canvas of 36, or two inches. It was a happy coincidence to continue with the numbers I used for The Hidden Owl, The Hidden Cat, and The Hidden Osprey quilts. I started by stitching black lines, then filling around them randomly.

As I stitched, the black lines suggested "migration" to me, so that is the title of the piece. I thought of the lines as migrating up from the bottom, the blues suggesting water, the tans suggesting land. And of course connections among birds, persecution, and people.

A few weeks later I saw a New York Times article about Julie Mehretu's art and was surprised how my little needlepoint seemed to echo her aesthetic. Her topics are serious: fires, migration, and refugees. Her style is calligraphic, abstract, colorful, and full of movement. Someone to study more. The catalogue for her exhibition, self-titled Julie Mehretu, was given high marks by the critics, and I requested it from the library for a deeper exploration.

Ultimately, the little needlepoint became part of a box. Now it is an object. The whole project took about seven or eight hours. I will put the keepsake needlepoint boxes for sale on nevermindtheart as I finish them. Here is the first one, Migration. 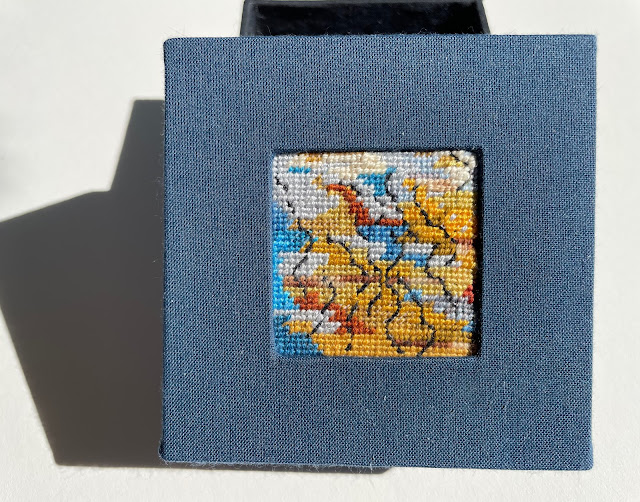 It was relaxing to be able to do this outside, inside, anywhere, and to be using threads that had seemed previously to be useless. 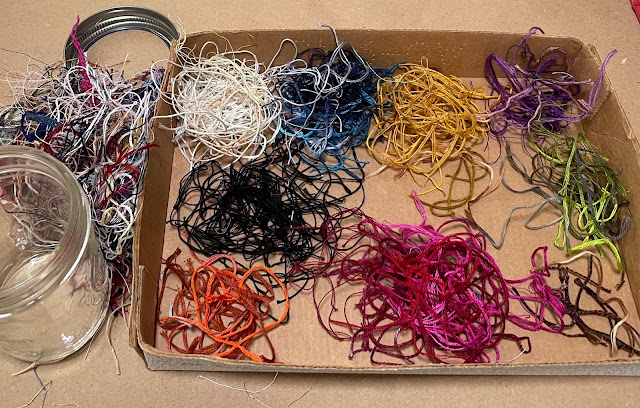 CrowGirl said…
I'm really excited to see your explorations in needlepoint. It's something I dabble with myself, having worked for a needlepoint magazine for a few years, once upon a time. You might really like the work of Connie Pickering Stover: https://conniepickeringstover.com/gallery-of-slides/

I really like the free-form organic feel of her work, very different from the cutesy/folksy style so common in the stitching community.
March 31, 2021 at 10:44 AM

Alisa said…
CrowGirl – Wow! I just checked the link and her art makes my heart sing! Thank you so much! I really like it! And would never have found it on my own. I look forward to spending more time with it and this process. Thanks for writing!
March 31, 2021 at 2:26 PM